The Ancient Barbecue or TAB as they like to call it is located on the third floor of the Good Earth City in Sector 50, Gurgaon.  This restaurant has the not so common concept these days, of live barbecue grills plus buffet. The buffet is mostly North Indian with a few Chinese and Continental dishes.

As soon as you enter, you’ll see a huge airy area with lots of lighting, big projector screens and comfortable furniture with not so light music playing. The place is filled with energy so if you’relooking for a quiet evening dinner with your family, you might want to reconsider.

Quick. On seating, the servers place your personal little grill on the table and almost instantly with the unlimited supply of vegetarian or non-vegetarian starters as per your choice. You can even ask for BBQ skewers or starters which are not there on the menu and the chef will be happy to oblige.

The filling part again-Food! When we walked in, we thought only the concept and the interiors are similar to BBQ nation, but the food itself is almost straight out of the BBQ nation kitchen!

The dips accompanying the live BBQ grill were a bit of a disappointment.

The Grill: The veg ones included Paneer Tikka, Cinnamon Grill Pineapple, and Chatpata Bhutta(corn cob with spices). They too lacked flavour and the paneer was way too spicy than I like. There was more variety in the non-vegetarian skewers, but the usual stuff – Chicken tikkas, Kebabs etc.

Overall in spite of the fact that the live BBQ is the main attraction of the restaurant, they could not nail it.

The starters:  We only tried the vegetarian starters and the highlight of the list was the Crispy Corn Kernels (yes again the BBQ nation style) which were perfectly cooked and filled with flavors. Also the Salsa Potato and Chili Garlic Fish  were not bad. But again, you can ask the chef for more variety like chilly paneer/ potato, salt and pepper and more.

Drinks: Their Bar menu offers plenty of options including all the classics and a few cocktails with “The Ancient BBQ Twist” like the Masala Martinis. We tried The Pomegranate and Passion Fruit Martini which was – yum.

Main Course: If you manage to make it to the main course (which we barely did), you’ll find an elaborate North Indian spread an a few Chinese dishes. They simply nailed the Dal Makhni and the Hyderabadi Dum Biryani. 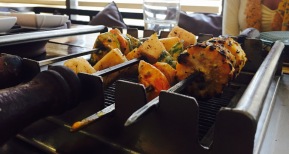 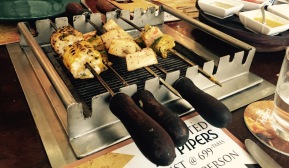 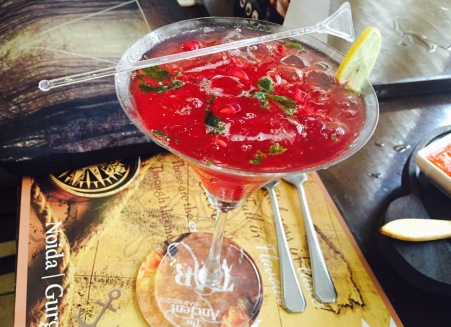 The salad spread had the usual elements like the sprouts, onions and pasta salad. But avoid this section if you can.

They serve you hot breads at your table and my recommendation – garlic naan.

Dessert: Who can say no? We tried the Chocolate Mud Cake and the Orange Poppy Seed cake (we could not make space for more) and both of them lacked that punch.

The place is really pocket friendly and a meal would cost you about 700-800 rupees per person including tax, which is great if you look at the spread they have to offer.

After trying so many places with the same concept, I think I need a change. But someday, with a hungry tummy and a tight pocket, I might just head to TAB!