Zerzura, a middle eastern and mediterranean lounge in the southern part of Delhi is a one of it’s kind restaurant with belly dancing every Wednesday and Live music nights every Friday. It will surely transport you to the middle east with its decor , music, food and ofcourse, the belly dancing! But, if you are planning to go for lunch, you might find Zerzura to be a little dull and few tables occupied. It’s more of a night place.

Zerzura is named after the city ‘Zerzura’ in Sahara Dessert which was given many names such as ‘white as dove’ and  ‘an oasis of birds’ for it’s pristine pools, palms and springs.

Did I feel the city at this place? Oh yes! Divided into indoor and outdoor portions, the restaurant looks rich and typically middle eastern with gold and grey look while the outside has dark wooden upholstery with white curtains all around. 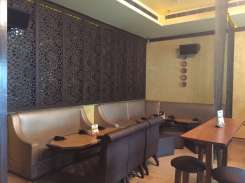 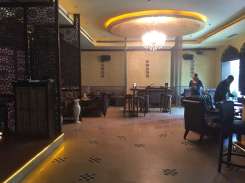 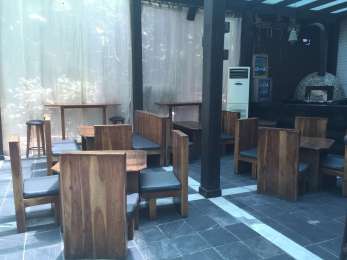 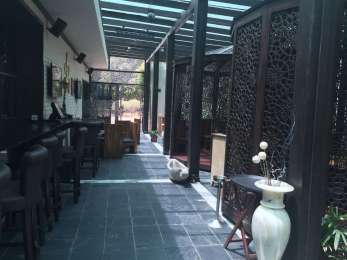 Mezzetini (Cocktail): Mezzetini is basically a martini but at Zerzura it is served in different flavors and in a very unique way. They serve the Mezzetini in an Ice bomb placed inside a Martini glass. the ice bomb keeps the drinks chilled and refreshing. I tried the following flavors and found the green apple the most refreshing of the lot for summers: Cranberry, Green Apple, Chocolate and Watermelon. all were fairly potent drinks and I really liked them. 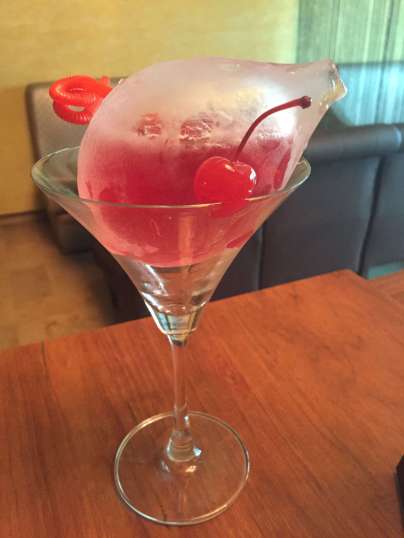 Jaffa Orange (Mocktail):  Jaffa orange is a yummy drink for non drinkers with a good flavor of orange,mint and dates in it. Quite sweet to be honest and sweet lovers will really like it. 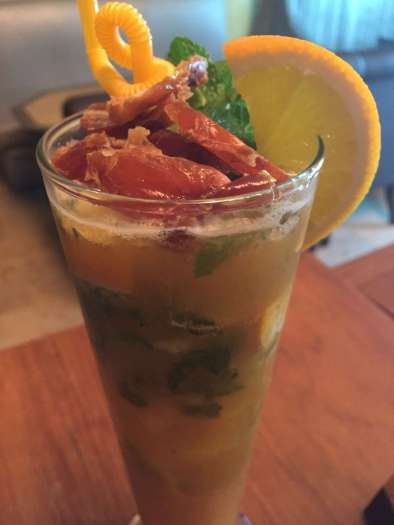 Amara (Cocktail): Vodka with rose flavor…too good and very girly according to me. It had a hint of lime and spice as well. The overall combination needs to be tried ! 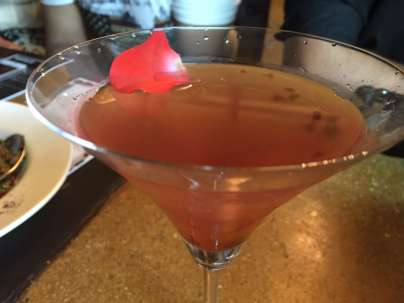 Red wine Sangria: Regular sangria with well soaked apples and a zing of orange. Liked it. 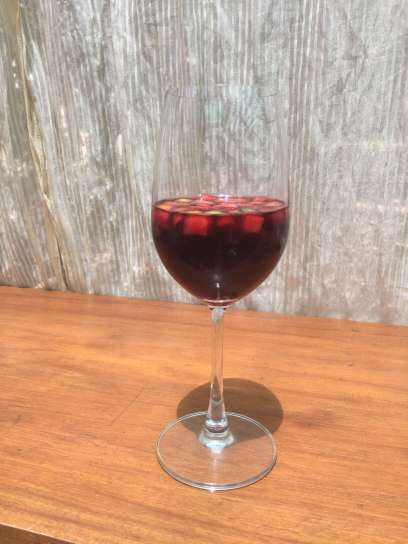 Hummus: Classic hummus made from chickpea,tahini and olive oil. The texture here was perfect! Neither too fine nor too grainy.

Baba ganoush: Lovely eggplant dip with a a hint of lemon, sesame and loads of olive oil. Not a fan of this dip in general but can say that it was prepared well here.

Cacik: A dip so similar to Tzatiki that I thought it to be that. Yogurt with cucumber , olive oil , garlic and a hint of mint. This dip has always been my favourite in Middle eastern cuisine.

Ankara-style lamb tarts: Oh so yummy! Minced lamb in a crispy tart and baked with cheese on top tasted divine and will definitely be on my list again when I go next.

Chicken wings with sumac and zartar were good. I loved the tangy (lemony and spicy) flavor rendered by sumac.

Kibbeh Meshwee:  More like a minced meat fried croquette which was individually a little dry but tasted good with the dips in the platter 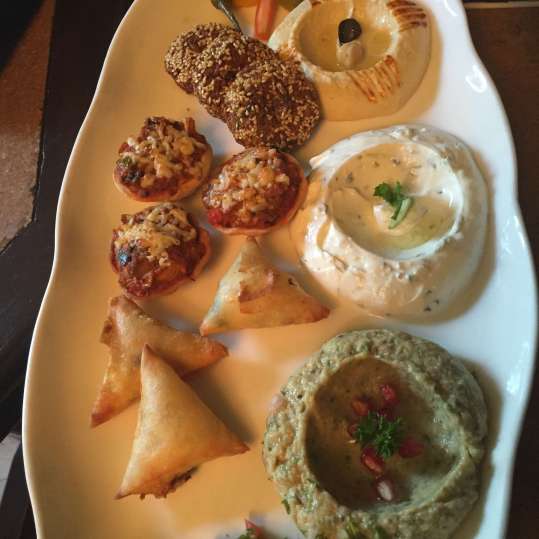 Pineapple and pomogranate Tabouleh: Basically a salad with finely chopped pineapple, onions, corainder ,parsley and pomogranate amongst many things. I am not a salad person but still found this good as it was quite crunchy and I loved the sweetness of the fruits!

Orfali Kebab:   Minced lamb kebabs which were amazing! These were char grilled and juicy. There was a crunch added by the extremely finely chopped bell peppers in the kebab. Liked it.

Bus Station Kefta: Kefta is like a kofta in India/Meat balls in a pan of boiled eggs and a thick tomato curry and baked. Oh so lovely !  I finished half the dish alone. 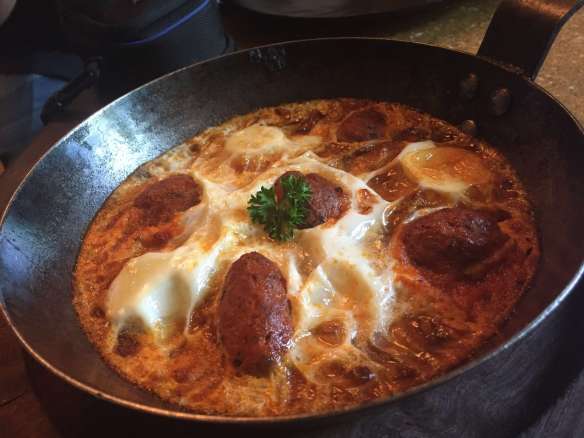 Casablance Cous cous with roasted summer vegetables tagine: A colorful dish which was a delight to the eyes! Also, quite healthy since cous cous is very low on calories and high on fibre and veggies. Both were cooked in an earthen pot called the tagine and even served in it.

Traditional Baklava: The best baklava that I have had in Delhi! It’s a pastry of phyllo dough stuffed with a lot of dry fruits and I loved that (the most prominent one being pistachios at zerzura).  It’s a must try! It was served with ice cream which made it even better. 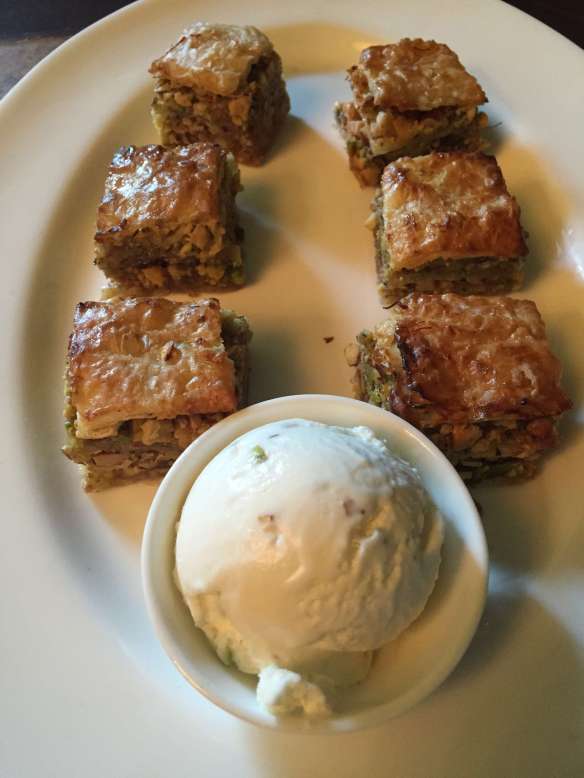 Date and fig Gratin with honey ice cream:  I somehow didn’t like it too much as this combination didn’t work for me. Also, it was too sweet. 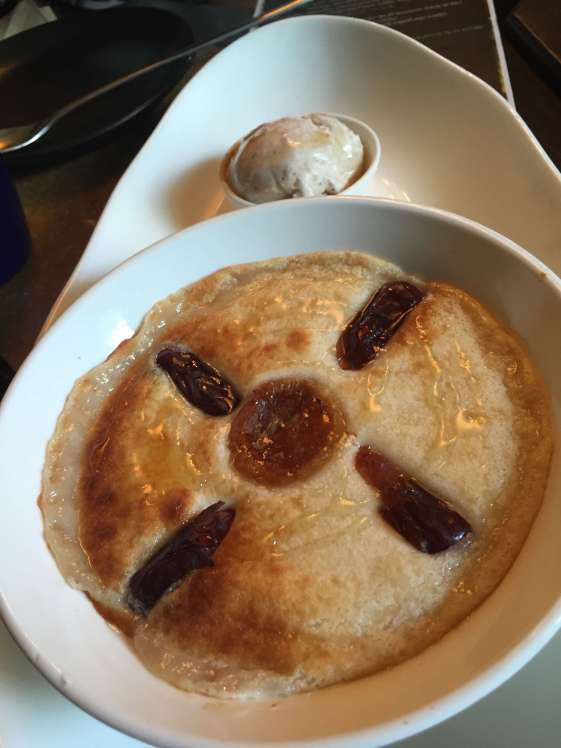 M’hanccha with cinnamon ice cream: At first I though it to be something like a typical almond halwa but it turned out to be something totally different! It was coiled phyllo rolls with strong almond flavour. The sweetness was mild making it light and chopped almonds on topped added a good crunch. Really liked it individually and ice cream went well with it. I tried a bite of it with honey ice cream as well and it tasted good. 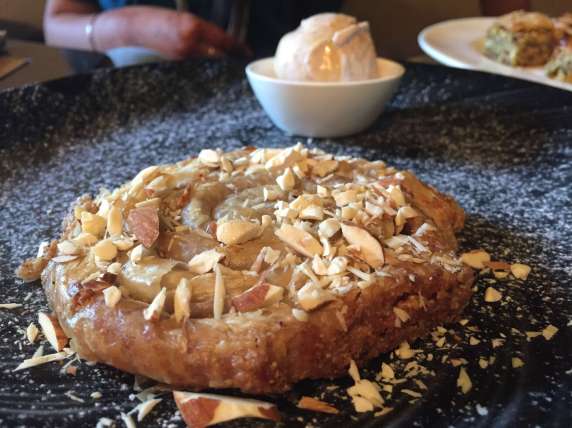 Overall, Zerzura has done a great job with their food, combinations , decor and the service (which was prompt). I want to experience their Belly dancing nights and Musical nights and will surely be back!

More about Zerzura? Find out here: